On the theme of transportation based yarn bombs, I thought I’d write about one of the ways I like to get around town – by bicycle.  I decided to yarn bomb my bike this spring.  I love the smiles and curious looks people give me when they see me riding around town.

My humble yarn bombed bike under our little ‘garage’ in the loft. There is a matching helmet too.

I was curious to see how others yarn bombed their bikes.  The yarn bombing blog is a great resource, filled with a lot of lovely yarn bombed bikes, check them all out here.

Found on the Yarn Bombing blog, a bike at Hindmarsh square in Adelaide at the Bike SA hub

a bike by the famed Crochet Olek

Love this collaboration between Crochet Olek and Dev Harlan 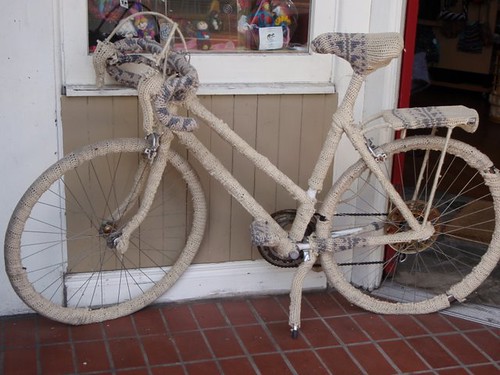 From the All over Albany blog,” yarn bombed bikes on Broadway outside Common Thread in Saratoga Springs. The bikes — and a nearby building column — were yarn bombed during Knit in Public Day last month.”

Blue yarn bombed bike from the yarnbomb.com website made by the Bike Art Adelaide group

Love this lace bike by the Bike Art Adelaide group

And of course bike racks! I could devote a whole post to them, here’s a yarn bombed bike rack from the City Girl Rides blog.